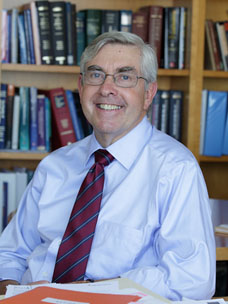 Walter J. Koroshetz, M.D., was selected Director of NINDS on June 11, 2015. Dr. Koroshetz joined NINDS in 2007 as Deputy Director, and he served as Acting Director from October 2014 through June 2015. As NINDS Director, Dr. Koroshetz directs program planning and budgeting, and oversees the scientific and administrative functions of the Institute. He has held leadership roles in many NIH and NINDS programs including the NIH’s Brain Research through Advancing Innovative Neurotechnologies (BRAIN) Initiative, the NIH Blueprint for Neuroscience Research, the Traumatic Brain Injury Center collaborative effort between the NIH intramural program and the Uniformed Health Services University, and the establishment of the NIH Office of Emergency Care Research. Additionally, Dr. Koroshetz serves as Chair of the Interagency Pain Research Coordinating Committee (IPRCC) and the Executive Committee for the NIH Pain Consortium.

Before joining NINDS, Dr. Koroshetz served as Vice Chair of the neurology service and Director of stroke and neurointensive care services at Massachusetts General Hospital (MGH). He was a professor of neurology at Harvard Medical School (HMS) and led neurology resident training at MGH between 1990 and 2007. Over that same period, he co-directed the HMS Neurobiology of Disease course with Drs. Edward Kravitz and Robert H. Brown.

A native of Brooklyn, New York, Dr. Koroshetz graduated from Georgetown University and received his medical degree from the University of Chicago. He trained in internal medicine at the University of Chicago and Massachusetts General Hospital. Dr. Koroshetz trained in neurology at MGH, after which he did post-doctoral studies in cellular neurophysiology at MGH with Dr. David Corey, and later at the Harvard neurobiology department with Dr. Edward Furshpan, studying mechanisms of excitoxicity and neuroprotection. He joined the neurology staff, first in the Huntington’s Disease (HD) unit, followed by the stroke and neurointensive care service. A major focus of his clinical research career was to develop measures in patients that reflect the underlying biology of their conditions. With the MGH team he discovered increased brain lactate in HD patients using MR spectroscopy. He helped the team to pioneer the use of diffusion/perfusion-weighted MR imaging and CT angiography/perfusion imaging in acute stroke.